A saint was a sinner too. True knowledge can only be gained when people make mistakes. Of course, it matters a lot whether or not we learn from our follies. Meet Rohan Mehta, one of the youngest PMS fund managers in the billion-dollar industry, who openly admits the wrongs he did in the early part of his investing journey, and then smartly used those precious realizations to create investment systems that today manage crores of money. It is almost poetic justice. 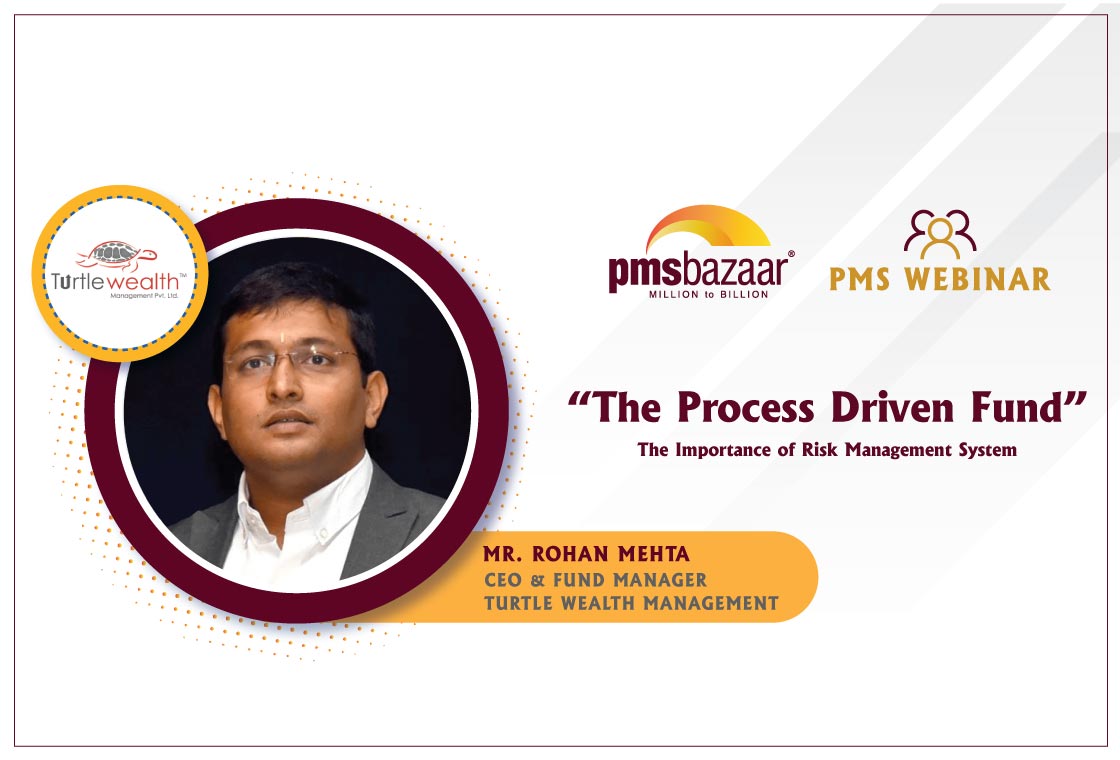 Rohan's Turtle Wealth, headquartered in 'diamond city' Surat, is a promising addition to the fast-growing Portfolio Management Services space. With a young dynamic team, Rohan sees the sky as the limit for Turtle Wealth, named after the animal which beat the fox with perseverance and focus on the end-result.

In a special webinar session organized by PMS Bazaar, Rohan reveals his 'kal, aaj aur kal' when it comes to investing, market, strategies in a characteristically witty and frank manner. Coming from a typical Gujarati family, Rohan says the number one priority has always been never to lose money as a professional investor, and now as the steward of the hard-earned money of resident & non-resident clients. Read on to know more.

One degree - From good to great

A typical fund manager usually quotes Warren Buffett, Charlie Munger, Ben Graham etc. at the drop of a hat. American investing legends have their own stories. Rohan, while being a fan of the classical market gurus, seems guided by his own moments of understanding. So much so that he even ended up writing a book on something profoundly simple, yet brilliant - Water Boils at 212°F.

One day, the new-age dhandho investor that Rohan is, realized that water is warm till 211°F. That extra degree, that journey to 212°F makes water powerful enough to power a train! "It’s that one extra degree that makes a difference of being a winner or a follower...," says Rohan about his best-selling book.

But Rohan is no typical author type. He remains tethered to money-making, for clients first and for his firm later. He believes investing is a lot of science and a tad bit art. But, these lessons did not come cheap.

"I don't come from a rich family. I lost Rs 50,000, money taken from my father. I lost it in trading. The loss made me realize many things, it pushed me to work hard," he says, letting his guard down. While he came across some market mavens and did pick up interesting pieces of nuggets as his journey progressed, Rohan did not want to be fed by others. He wanted to wear his own apron.

Money matters, every penny of it

Turtle Wealth oversees assets worth Rs 200 crore today including money in advisory. Every trader, investor, person wants to roll in riches. But, the key to being financially solid is not to lose much.

"Every penny counts. I have seen people lose money up close and personal. So, we must know how not to lose money in markets. And, it all starts with a system driven approach," says Roha, who over his 15 years of experience, worked in institutions like Standard Chartered MF, ABN Amro, Anand Rathi, Jainam Share Consultants to name a few.

Turtle Wealth has two strategies - 212° Wealth Mantra and newly-launched Growth Mantra. Rohan says that NRI clients ask him about risk, but domestic clients ask about return. "Risk is the thing you can manage. Returns cant be directly managed," he says, giving an important lesson. The idea is to understand the risk of investing in businesses.

"We invest in good businesses. It may sound too simple a philosophy, even a kid can understand it. It does not have mumbo-jumbo. But by investing sound businesses with growth potential, we lower risk," Rohan adds.

Modern civilization has given us tools to accelerate processes. Yet, there is no tool or device that can speed up time. Many investors, who think they are long-term, do not behave in the same manner. Merely selecting a good business, a good management and a good price is not enough. Adequate time needs to be given.

At 20% CAGR "It takes 4 years to double your wealth. 13 years makes your wealth multiply 10 times. In 26 years, you can get 100x of your wealth," quips Rohan, talking about the effect on compounding.

Unfortunately, investors exit early. Those who stay on, hang up in the last lap. "Often, investors sell a stock when only half of the work is done. Think about a pond of lotuses where every day you have twice the number of flowers. That pond fills up in 30 days flat. On the 29th day, the pond has 50% of lotuses. It is only on the 30th day that the flowers double, filling up the entire pond with their grandeur," Rohan says, adding that investors can't afford to miss the best-return days.

One of the important parameters for Turtle Wealth stock selection is avoiding debt ridden businesses. Rohan says they prefer lowest to 0 Debt/equity. But, isn't debt important to grow business? "My grandfather said'' returns you can't make everyday, but interest you have to pay everyday."

Too much debt is a bad thing for companies and, importantly, shareholders because it prevents a company from creating a cash surplus. Furthermore, high debt levels negatively affect common stockholders, who are often last in line for claiming payback from a firm that becomes insolvent. Some promoters prefer a loan to grow business as debt does not provide an ownership stake and avoids dilution to the owners' equity position.

With long-term investing in vogue, many investors think the best holding period for equity is buy-and-hold-forever. While this may be a fashionable way of putting things, staying invested forever may not be ideal. In fact, it may be sub-optimal for a portfolio."

We invest in 15-18 stocks. And, believe me we know the exit price target before we invest. Fundamentals say what to buy, technical analysis says when to buy. Our Risk Management System, which is based on investor profile, is designed to be perfect. But, it is important to exit at the price. There are always many opportunities around, and it is important to get out," Rohan says, as he talks about the 3 Star Strategy for exiting stocks.

At the end of the webinar session, Turtle Wealth fielded questions from viewers. Here are some interesting ones.

Q: What do you mean by a human-friendly portfolio?

A: Turtle Wealth as a company is started by us and we don't invest in business that kills animals. So, these businesses have to be ethical in nature. Apart from companies that profit from direct killing of animals, we avoid drug, alcohol, high debt businesses.

Q: What is your cash holding at present?

A: It will vary with client portfolios. However, at a broad level, we have 7% cash overall. We don't time markets. Our cash position is not by design.

Q: In a declining inflation scenario, is it possible to generate 20% CAGR as indicated in your mission statement?

A: Yes, it is possible. Making returns is important. Gains can become bigger if returns are not lost or capital is not eroded.

AIF CATEGORY 1 - The New Age of Investing. What worked so far doesn’t work anymore. Have you realigned your portfolio to this new reality yet? India has changed and continues to change at a rapid clip. Businesses, and hence, your portfolio, has to keep pace. A 10% to 20% exposure of your portfolio to AIF Category 1 funds or directly to startups is ideal – Gain more knowledge from the exclusive article by Mr. Rajesh Sehgal, Managing Partner, Equanimity Investments

The dream to hit a $5-trillion Indian economy is still alive. It was expected to happen in 2025, but then Covid-19 came and ravaged the path. But, green shoots are beginning to appear even though the number of sceptics questioning a quick recovery is also rising by the day. For long-term investors, these are trying times. Things appear at the cross-roads. Noise levels have risen sharply. At these times, it pays to remain focused and fixed on your investment goal. Those who can keep their eye on the big picture will win hands down. Those who adjust at the slightest discomfort will remain unhappy. In an exclusive webinar with PMS Bazaar, Madanagopal Ramu, Fund manager - Equity, Sundaram Alternates talks about 3 long term investing themes. Read on to know more...

Most important value add of long-short portfolios is a superior client experience because of consistency of returns. Long-short portfolios fall between traditional debt and traditional equity in the risk-return spectrum. A common misconception is that leverage is used to amplify risk, whereas in practice long-short funds use leverage to dampen risk by taking short positions. Gain more knowledge from the exclusive article by Mr. Nalin Moniz, CFA, Chief Investment Officer, Alternative Equity and Business Head, Alternative Equity, Edelweiss Asset Management.

Is Cash The King For Portfolio Management Services

Out of the 144 PMS strategies that disclosed cash, 47 have between 5% & 10% while 5 strategies are completely invested i.e. zero cash as on May 2020. In this article, we will look at, among other things, how strategies are placed with cash, changes in cash positions, and also put the spotlight on those who display extreme positions in terms of cash holdings as % of assets.

After lying low for quite sometime, midcaps are back with a bang. In just the last 3 months, the S&P BSE Midcap index is up 20%, out-performing even the Sensex. But, midcap investing is not about 3 months or 12 months. One needs to give due time to midcaps to flourish. If one can give 5 years, there is a 50% chance that a midcap company can emerge into a largecap corporation, and grow your wealth in a big way, says Rakesh Tarway, Portfolio Manager, Motilal Oswal AMC in an exclusive PMS Bazaar webinar. In an insightful session spread over one hour, Tarway, who has 17 years of experience in equity markets as analyst and head of research, shares investing lessons about midcaps and discusses the Motilal Oswal Focused Midcap PMS strategy. Read on to know more.