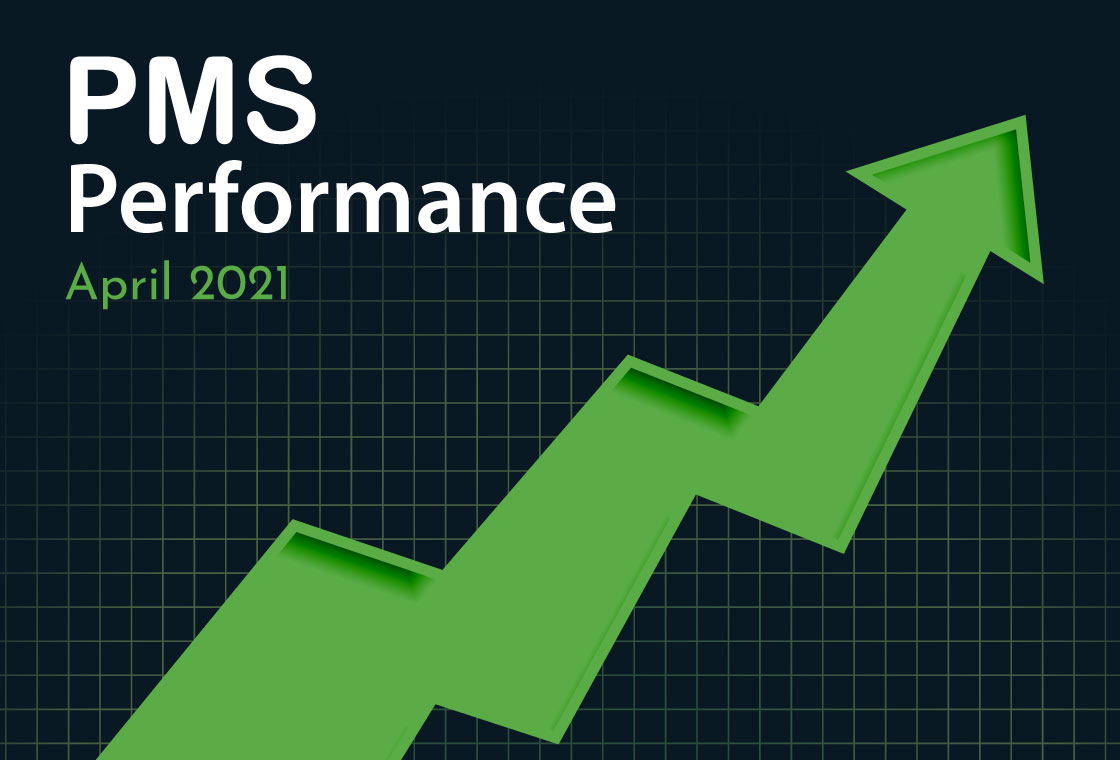 After broader markets surged in February, the last month of FY2020-21 witnessed relatively modest gains. With equity markets rising 1.11 per cent in March, Portfolio Management Services (PMSes) yet again underlined their ability to beat benchmarks. Of the 213 strategies tracked by PMS Bazaar, as many as 107 funds outperformed the Nifty which means investor wealth in every second PMS scheme performed better. Continuing the existing trends, smallcap and multicap PMSes sustained their superior alpha generation capability in March.

Like each month, March saw its share of best performers in the billion-dollar PMS universe. The number 1 ranked PMS scheme in March 2021 is Nine Rivers Capital Aurum Small Cap that gained 15.6 per cent, an alpha of 13 percentage points compared to BSE Small Cap (2.45 per cent).

At number 3, Alchemy Ascent clocked 8.20 per cent rise in March 2021, far higher than the multicap category average of just 1 per cent.

NJ Asset Management Bluechip emerged as the 4th best PMS performer at 7.18 per cent return, which is also higher than multicap category average.

At number 5 was Centrum PMS Micro that generated 7.16 per cent return in March 2021, placing yet another smallcap scheme in the top performers club.

Large & Midcap - Out of this small list, the best schemes for March 2021 were Bonanza Growth (3.36 per cent), Care Portfolio Managers Large & Midcap (1.67 per cent) and IDFC Asset Management NEO Equity Portfolio (1.43 per cent).

Smallcap - For the over two dozen smallcap PMSes, the category average return in March 2021 was 3.71 per cent vis-a-vis 2.45 per cent of BSE Small Cap, showing the alpha generated by the funds. The best performing smallcap PMSes in this month were Nine Rivers Capital Aurum Small Cap (15.6 per cent), Centrum PMS Micro (7.16 per cent) and Fort Capital Investment Advisory Value Fund (6.26 per cent). All these schemes figure in the overall top performers list as well.

Others - Among the handful thematic, sector and multi asset PMSes, the best performers of March 2021 were Anand Rathi Advisors MNC (6.90 per cent), Kotak Pharma (2.17 per cent) and First Global India Multi Asset (1.18 per cent).

PMS bazaar, on behalf of the Investor Community, appreciates the PMS Top performers. It is with lots of pride that we recognize their performance, and we have awarded the Top-3 PMS Performers of the calendar year-2019. These are the PMSes Toppers of The Tumultuous Times.

Who Owns What Top holdings of PMS Managers

PMSes have nearly 200 unique stocks in their disclosed portfolios, with single-stock weight as high as 32% allocation in a strategy. In this article, we take a detailed look at the most-owned stocks, unique stocks, sectoral preferences and stock allocation weights in May 2020.

Why Multi Asset Strategy Is The Best Way To Navigate Markets

Investing legend Warren Buffett has always warned against putting all your eggs in one basket. But, thousands and lakhs of investors over the years have repeated this terrible mistake. What happens when all your eggs are in one basket? Returns become one big financial omelette!