"Sunil Singhania on the New Normal for Market Valuation"

Abakkus Asset Manager runs equity strategies in AIF and PMS platforms. Founded by renowned fund manager Sunil Singhania, who achieved great fame in Reliance MF, Abakkus has made a name in two years of its existence. In a special session organized by PMS Bazaar, Sunil and Aman Chowhan share with investors their take on US yield, current market valuation, Covid impact, Abakkus investment philosophy and much more. 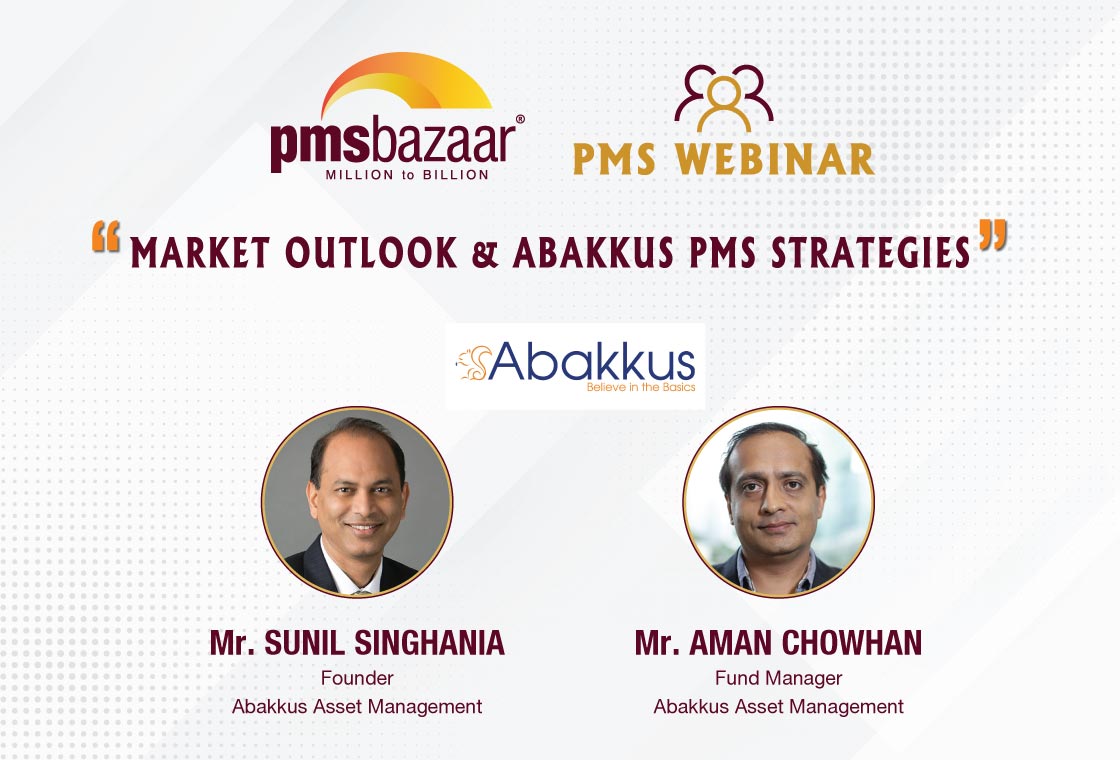 Covid lockdown again? - For the fourth consecutive day, over 40,000 fresh cases were reported in India and the steady increase in cases has once again pushed India to become the world’s third-worst affected country in terms of daily cases. Sunil, however, feels the chances of COVID new lockdown is less. In terms of vaccinations, India is still slow. But with every increasing day, and at about 30 lakh new vaccinations run-date, Abakkus is of the view that cases should start to ease off. "You know, we have seen a spike in number of cases. But as vaccinations increase, as has been the case in the US, UK and Israel, our view is that the vaccine seemed to work. The efficacy rates are anywhere between 80 to 95%. And as the world gets more and more vaccinated, this concern about COVID should ebb," Sunil opined.

Effect of low rates - Because of prevailing high liquidity in global markets, the short-term rates have been at an unprecedented low levels. "And I think this affects positively for a multiple of reasons. So even in India, you know, interest rates have been at an all-time low kind of level, we have seen FD rates fall to four and a half to 5%. The companies get benefits, because companies are paying less interest. And what it also does is it stimulates a lot of demand." Sunil said. Because of lower interest rates, there is a multiple impact on steel, cement, building materials. "...a lot of other sectors have also started getting benefits because of both automobiles and the housing sector," he added.

Weak dollar is good - Usually, history shows that the US dollar was constantly appreciating. Right from 2008 to 2020, the dollar was continuously strengthening. "What we're seeing now is the reverse, last six months the dollar has decisively depreciated against the British Pound, against the Euro, against the yen, against Renminbi. And, you know, or to the extent of almost 6-7%. And we are now in a scenario where dollar carry trade is very much on the cards and it's already happening." said Sunil. The money which was all going into the US and that is our estimate, that almost $10 trillion worth of additional flows went into the US economy over the last 10 years. That has reversed and we are seeing therefore, emerging markets attracting a lot of flows, commodities attracting a lot of flows, even new asset classes, like blockchain and bitcoins attracting a lot of flows. "So, as long as you know the scenario for the dollar continues to be stable to weak, we believe that this money will flow into emerging markets and therefore India is going to continue to benefit," he added.

Understanding US yields - The sharp rise in US 10-year yields from 1% to a high of 1.6% within the month of February led to speculation of Taper Tantrum 2, with speculation running high of US Fed stopping the liquidity tap and rates rising in response to rising inflation. This triggered massive unwinding of consensus carry trades leading to a spike in the US dollar and sell off in global equities. Emerging markets including Indian were amongst the worst hit. "The underpinnings driving the normalisation of US bond yields to 'pre-covid' level of ~2% should not spook equity markets, although knee-jerk reactions are expected in bull runs. Also, it is unlikely that the Fed will let US real yields rise much higher," Sunil said.

Economic activity is back on track.  Though March 2021 has witnessed small lockdowns in some places and there might be a slight dip, eventually the thought is very clear that India is heading back to normalization. "....we see highway activity, IIP growth has inched up back to positive level, e-way bills are almost at 80 90% of normal and GST collection has been over one lakh for the last four to five months in succession. Other important factors like PMI manufacturing is well, above 50%, which is a level that denotes expansion," Sunil observed.

The PLI scheme (performance linked incentive scheme) should be looked at in combination with the China plus one strategy all over the world. "I think globally, countries and companies are getting a little hassled with the domination of China. And they all want to move passively to a second source. And though India is not obviously among the top two, three countries, but India is definitely the top five countries to get benefitted from sourcing away from China," Sunil says.

"As the results of March 2021 and March 2022 get discounted, we are looking at a PE multiple of of 18 times FY 23. And though it is 10% higher than the 10 year average last 10 year average, given the huge fall in interest rates, are view is that structurally the PE multiple of 18 times seems to be the new normal. And we would say that markets are not cheap, but they are not expensive either," says Sunil.

In 2016-17 to 2020, there was a period where only seven, eight, ten companies were performing. It was basically quality getting more and more expensive. In 2018 and 2019 whereas the largecaps did not fall in fact, they in fact rose  but small and midcaps were butchered. "...things are already changing. In 2020 mid and smallcaps started to slightly outperform the largecap but in 2021 in the first two-and-a-half months, very clearly small and midcaps have outperformed the largecaps. Our view is that given their cheaper valuation and also faster profit growth, money is to be made in the mid and smallcaps vis-a-vis largecaps," said Sunil.

Abakkus is now more than a two-year old company. It has two live AIF funds and two PMS strategies.

Alpha focus - According to Aman Chowhan, the first and the foremost thing that Abakkus does is that it views itself as an alpha generator. "...we are not asset allocators, you're not investing into any company or any sector just for allocation, we don't look at underweight overweights. For us, each and every individual stock is bought with the intention of making an absolute return," emphasised Aman.

Flexible - Flexibility is key. Aman said whether the asset manager follows value investing or growth investing or a combination, the focus is on seeking alpha from investments. "We are purely fundamentals driven firm, we don't indulge into any trading, any technicals, derivatives...pure bottoms-up investment approach (is what we offer). We have a team strength of 10 people here, which is a fairly large team for the size that we currently have. And the reason for that, is we do lots of primary research. So, almost 30% of the stocks in our portfolios would be stocks where there is no broker coverage," he added.

Aman also talked about how Abakkus follows a very independent thought process. "We don't get carried away by market views or what's going around and within the peer groups, we are very clear as to what companies we have bought and the reasons for which we have bought. And we're happy to follow all those until proven wrong," Aman added.

Those who missed the opportunity to hear from the experts directly can listen to the entire session through the link appended below:

Who Owns What Top holdings of PMS Managers

PMSes have nearly 200 unique stocks in their disclosed portfolios, with single-stock weight as high as 32% allocation in a strategy. In this article, we take a detailed look at the most-owned stocks, unique stocks, sectoral preferences and stock allocation weights in May 2020.

133 PMS Strategies reported 205 unique stocks in their disclosed portfolios, with single-stock weight as high as 29.75% in a strategy. In this monthly insight piece, we take a detailed look at the most-owned stocks, unique picks, sectoral preferences and stock allocation weights for June 2020.

Markets are not cheap but they are not expensive either

The September quarter (2QFY21) corporate earnings season was a blockbuster one, with big beats and upgrades. Markets have run up too, thanks to a tsunami of money being pumped in. Foreign investors have put more than Rs 50,000 crore in November alone, taking the yearly total over Rs 1 lakh crore. The situation today is dramatically different compared to March-April when Covid-19 fear had gripped everyone, including markets that crashed. PMS Bazaar hosted Mitul Patel, Senior Vice President | Fund Manager – Portfolio Management Services, IIFL AMC in an exclusive webinar to discuss the way forward. Patel is in charge of IIFL Multicap PMS Strategy, which is among the best-performing this year. Here are the important takeaways.

Most important value add of long-short portfolios is a superior client experience because of consistency of returns. Long-short portfolios fall between traditional debt and traditional equity in the risk-return spectrum. A common misconception is that leverage is used to amplify risk, whereas in practice long-short funds use leverage to dampen risk by taking short positions. Gain more knowledge from the exclusive article by Mr. Nalin Moniz, CFA, Chief Investment Officer, Alternative Equity and Business Head, Alternative Equity, Edelweiss Asset Management.

1-year data for over 180 funds shows a majority beating broad market index Nifty which was up 14.90%