Everybody makes money at some point, repeating profit over cycles is more important

Time tests us all. In the investing world of cut-throat competition, it is unlikely that one will be successful over a long period of time. But, there are exceptions. In 1999, Lashit Sanghvi, Ashwin Kedia, Rakesh Jhunjhunwala and Hiren Ved founded Alchemy Capital Management and that institution has stood rock solid since then. Very few portfolio managers have been managing this money under PMS for such a long period of time. As of March 2021, Alchemy managed about $900 million assets across domestic and offshore mandates. So, when such experienced professionals share wisdom nuggets with investors, one better listen carefully. 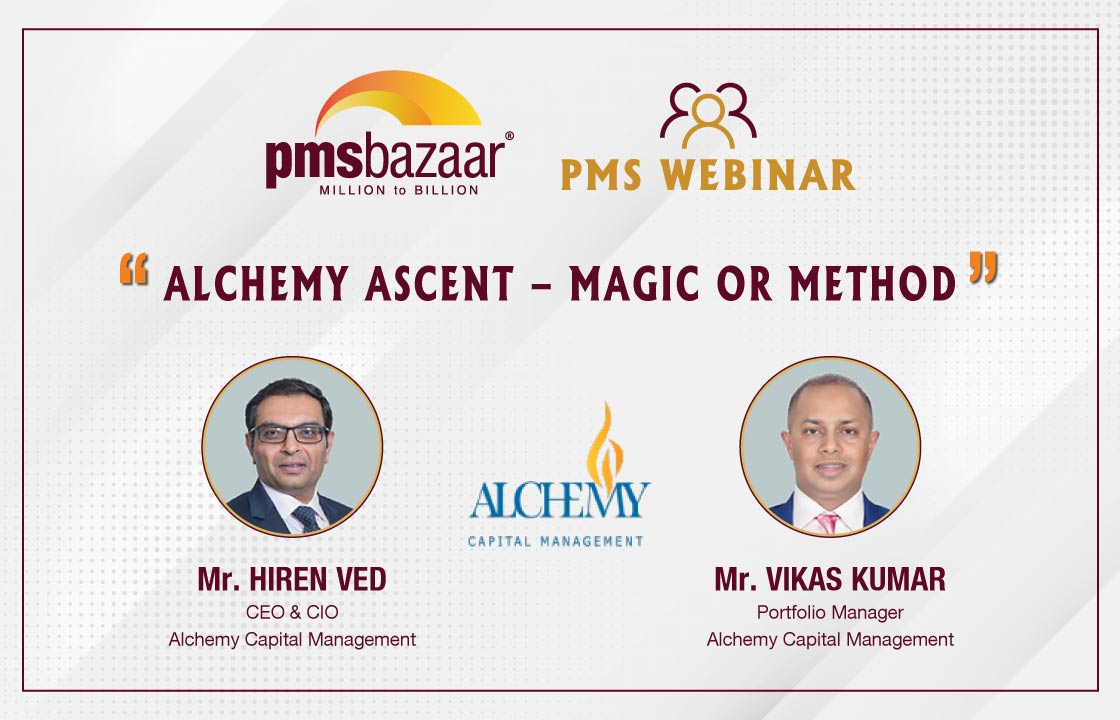 PMS Bazaar hosted a special session where Hiren Ved, Co-Founder, Whole-Time Director, CEO & CIO at Alchemy Capital and Vikas Kumar, Portfolio Manager at Alchemy Capital spent over an hour of their valuable time explaining the 'Alchemy way' of investing. If you have missed the session, read on to know the key lessons that can protect and grow your wealth.

Alchemy was started immediately after the dotcom bust and there was a general sense of gloom at that point in time, in contrast to the present situation.

"...generally people would tend to participate in the equity markets towards the end of a big rally or a boom, and then there would be something in the external environment which would create a crash or a significant correction. And then for several years, people would wonder, why they came to the world of investing in the first place," says Ved, who has a long-term track record of generating significant alpha over two decades.

Every mega cycle leaves a certain psyche, in the minds of investors. More often than not, investors are generally spending a lot of time trying to figure out what the market is going to do. What is likely to happen going forward?

"But the fact of the matter is that markets do what they have to do. And we as investors have to profit from what the markets are doing. There is a limitation to what you can do in terms of predicting markets....there is always a method to the madness, to profit from it, by investing methodically, and trying to take advantage of the several opportunities that present in front of us," says Ved.

Investing is simple and complex

There is always a need for professional management of money, because people don't have time. Investing is simple and complex, both at the same time.

"It's simple, because in any activity, there are certain simple rules and principles, but it's very difficult to follow them. It's complex, because everything in the world impacts markets and prices. Sometimes it's politics, sometimes it's economics. And there is a mix of behavior and sentiment, which makes it very interesting and complex," says Ved.

Most of the time people try to forecast what a business is likely to do. Fundamental analysts and fund managers spend a lot of time trying to forecast what can happen. But, as we all know, that by and large, forecasts are not very good.

"But because there is opportunity, money is made, because there is an enterprising entrepreneur who executes on that opportunity. And he creates and then there is an external environment, which can sometimes be very favorable sometimes be adverse to you, and how the business and the entrepreneur and the team executes on that opportunity, navigating all these externalities is what finally gives you a result in terms of profits," says Ved, who started his equity market career in 1991.

Data exists, but may be invisible

Market is a mechanism where profits are discounted at a certain multiple. The value of a business keeps going up, and you take advantage of it.

A lot of time is also focused on finding an individual company. Rather than spending time on predicting what a business can do, it is very important to spend time on certain basic characteristics that a business should have, which gives it an ability to become a winner.

"Great companies, at some point in time in their growth curve, or evolution, had a mixture of certain characteristics. Having a very disciplined database approach to go through how hundreds of companies look for those characteristics, which make companies great," says Ved, introducing the core principle of new PMS strategy 'Ascent'.

Alchemy Ascent PMS) is a multi-cap fund that endeavours to provide a consistent “high alpha” investment strategy which builds portfolios to deliver consistent outperformance over the long term, using an objective, back tested and data driven approach devoid of any biases. And, this strategy is only the 4th from the house of Alchemy.

In that sense, Alchemy is very differentiated in the marketplace not only because it is one of the oldest players but because as a house it has been very focused on equities. "...we've resisted the temptation of getting into many of the allied areas that several of our peers have gotten. Another very distinct philosophy and differentiator of alchemy is that in the last 20 years, we have only launched four significant strategies," shares Ved.

"...if you see if many of our peers who either may have been around as long as we are there, or maybe less number of years, by now, they would have 7, 8, 10, 12 strategies. The reason why we have fewer strategies is because we believe that we need to demonstrate to our investors that we can consistently over very long periods of time across market cycles, make money for them. Yes, there will be occasions when nobody gets it right all the time. Nobody's at the top all the time. But we have the conviction to run," Ved says.

If you look at the historical compounding of Dow Jones in the last 100 years, you will see that it is roughly around 7%. The average debt interest rate for the last 150 years as far as data is available, is around 6%.

"So, the issue in markets is not about making money, everybody makes money at some point, the issue happens when keeping your profits that you had earned and in repeating that profit profitability over cycles. I found that more important than what to buy etc, which activity is very interesting, more important was risk and more important was survival," says Vikas, who specializes in creating data-based quantitative algorithms & mathematically objective implementation strategies.

Explaining Alchemy Ascent's core thinking, Vikas said in order to control risk, and survive over multiple cycles, the ability to change one's mind is more important than having ideas. This flexibility is in-built in the process. The essence is to understand how Ascent strategy is formulated.

One, Ascent PMS strategy does not base its actions on subjective thoughts. Even if somebody likes a particular company management, there needs to be some sort of data, maybe a return on equity, or maybe return on assets etc. to prove that point. To be accountable in success, and to be accountable in failure, data provides certainty.

Two, Ascent's philosophy prohibits it from making a forecast regarding markets or regarding companies.

Three, Ascent is not guided by the need to behave like a world manager. "I have found that if you increase the number of variables, it sounds very intellectual, but it does not really work. In order to have some sort of accountability, you will have to decrease the number of variables....so, we work not on what markets can do, but we work on what our response is going to be given whatever markets can do," says Vikas.

His research has found that the greatest multi-bagger stocks give the best of returns and bigger pie of returns at the end of the journey.

Talking about the 5th component of Ascent's thinking, Vikas said most people say that they have come to the markets to buy a company. But, there's the difference between a good company and a good stock. "For example, Hindustan Lever has been a great company for multiple years, decades, but if you had bought it in 1999 and kept it in 2010, then your compounding would have been negligible. By that time, the index would have been up and a fixed deposit would be up too," points out Vikas.

It is important for investors to understand that investment managers are not in the business of being an entrepreneur. "We are here to take a call on what combination of businesses to have in our portfolio at a certain point in time. If a stock in our holding does not do well and we keep on holding for 10 years, there our compounding goes for a toss," he quips.

Once in a while, everybody has had some sort of a stock, which became a multi-bagger. But sometimes they sold it early or allocation was very less etc. While having a particular stock or some sort of stock is important, discipline is core to making money.

Rounding up, Alchemy Ascent universe is around the top 20 percentile of the market cap universe, which comes to roughly around $1 billion. There's a portfolio of around 15-20 stocks. The PMS strategy has defined selling rules, where justice to the portfolio is above justice to the concept.

Those who missed the opportunity to hear from the experts directly can listen to the entire session through the link appended below:

"A woman is like a tea bag; you never know how strong it is until it’s in hot water," once said Eleanor Roosevelt. This is one of the powerful quotes written on women. When the going gets tough, women get tougher. The toughness is hard-wired into them.

Real estate means different things to different people. For the average joe, it is home. For a builder, it is raw material. For users, it can be office, property, warehouse, hotels and what not. From an investing perspective, Real Estate or RE makes imminent sense for Indian HNIs, family offices, NRIs and offshore capital pools. Real Estate asset backed investments bring something very refreshing to the table for investors. In fact, RE backed investing is emerging as a robust new asset class when you combine them with High Yield (HY) credit investment opportunities.

The nuts and bolts of making money in fintech startup investing

Besides speaking about the – PETT framework, Varanium NexGen Fund's Aparajit Bhandarkar talks about how the AIF platform provides a lucrative way to earn outsized returns from venture capital investments.

There is always a lively debate between believers of growth investing and value. Should earnings growth justify any price? Or P/E be the value seeker's ultimate tool across cycles? For many, such discussions can influence their next investment. But, Amit Jeswani, Founder and CIO, Stallion Asset Management has picked his side long back: gunning for growth. In a special webinar organised by PMS Bazaar on 'Wealth Creation For The Next Decades With Growth Investing', the expert shares very important lessons for growth investors, how his PMS co Stallion approaches investments, practical insights into how some of the biggest growth businesses work and much more. Hailing from a family of stock brokers, Amit has carved a niche for himself by growing Stallion first as a research firm and then as a credible PMS player.

It is well known that India is a nearly $3 trillion economy (GDP) with a stock market that is almost nearly as big at $2.8 trillion. At a stock cap level, there are 100 large-cap stocks, 150 mid-caps, 666 small-caps and over 4,100 micro-caps. Such a representation may give an impression of many themes equally playing out at the same time. Rockstud Capital believes that or FACTh theme accounts for nearly 2/3rd of Indian stock market is the theme to be played for wealth creation.