How to Capitalize on the "Manufacturing Shift”

Manufacturing has emerged as one of the fastest-growing industries in India. Our Prime Minister Mr. Narendra Modi initiated the "Make in India" campaign to put India on the map as a manufacturing center and give the Indian economy international prominence. Hence, India has the potential to become a worldwide manufacturing hub, with an annual contribution to the global economy of more than US$ 500 billion by 2030. 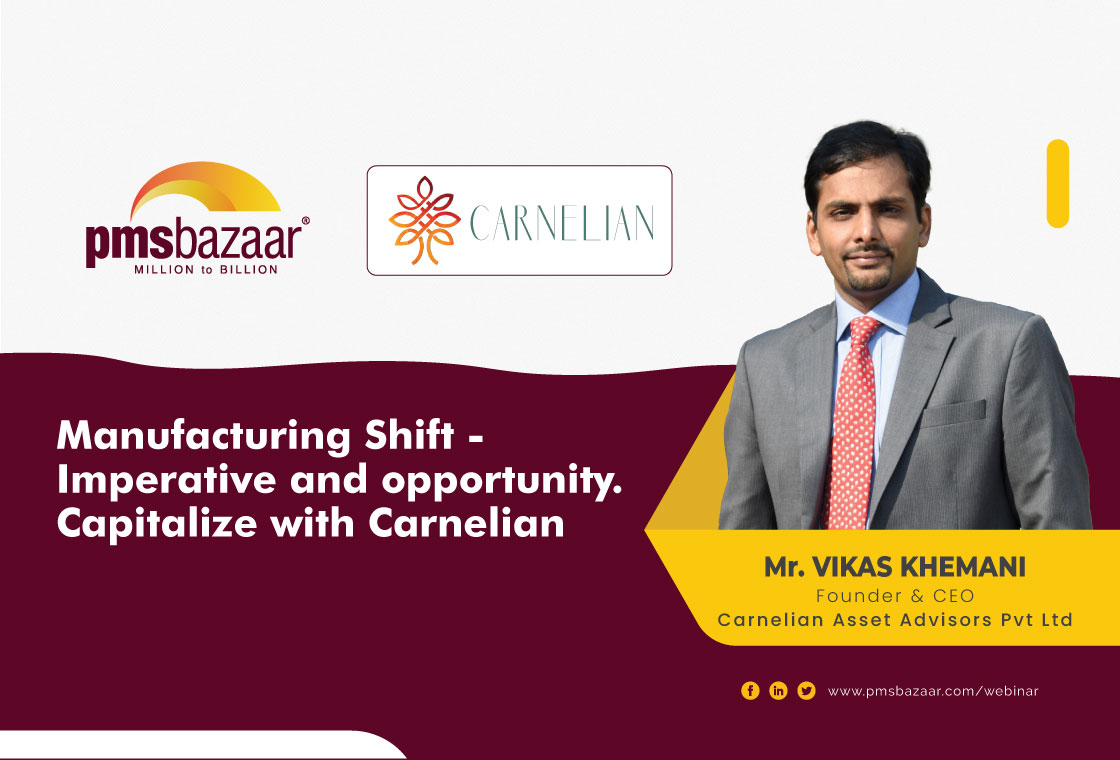 In recent years, with factors like Post pandemic “SHIFT”, recent government reforms, China plus one strategy, etc., the scope & growth projections of the manufacturing sector have improved multifold. This blog covers expert insights on how to capitalize on this “Manufacturing Shift”, taken from an informative webinar on the topic: ‘Manufacturing “SHIFT” – Imperative and Opportunity – Capitalize with Carnelian’, presented by Mr. Vikas Khemani, Founder and CEO of Carnelian Asset Advisors.

The rapid spread of the coronavirus pandemic last year dealt a serious hit to the global economy. Stock markets panicked when the world's largest manufacturer became the epicenter of the greatest pandemic in recent history, and supply links from China were cut. The age of Indian manufacturing was proclaimed when countries announced the need to decouple from China's tightly interconnected supply networks.

For decades, the services sector has fueled India's economic growth and helped to keep unemployment at bay in the world's second-most populous country. The outbreak of the coronavirus has prompted calls for an immediate rebalance of the economy toward manufacturing. True, India (together with the rest of the globe) has suffered greatly as a result of the recent COVID 19 issue, but there is much to be gained if we remain vigilant to the changing demands of the world. As a result, a systematic and planned strategy can set India on the route to massive economic growth, which will be fueled in the years ahead by its thriving manufacturing sector.

The government of India launched the Aatmanirbhar Bharat Abhiyan on May 13, 2020, with the goal of making India self-sufficient. Shri Narendra Modi, the Hon'ble Prime Minister, announced an economic package worth INR 20 lakh crore to assist the country in the event of a pandemic. Economy, Infrastructure, Systems, Vibrant Demography, and Demand are the five components that it focuses on.

The PLI initiative was designed to increase domestic manufacturing capability while also increasing import substitution and job creation. This scheme was implemented by the government to lessen India's reliance on China and other foreign countries. It promotes labor-intensive industries and strives to boost India's employment rate. PLI schemes have been proposed by the government for 14 industries so far, including automobiles and auto components, electronics and IT hardware, communications, pharmaceuticals, solar modules, metals and mining, textiles and clothing, white goods, drones, and advanced chemical cell batteries.

To counter China's monopoly in the pharmaceuticals business, the Union government has decided to build three major drug bulk parks across the country for Rs 13,600 crore. To fight this hegemony, the Narendra Modi government has begun to establish similar parks as part of the Atma Nirbhar Bharat initiative, which aims to make India self-sufficient, create jobs, and train indigenous talent. By 2025, the government plans to build a two-thousand-kilometer national highway network. Bharatmala Phase-1 is to build over 35,000 km of highways with a total capital cost of around Rs 10 lakh crore, with 20,000 km already under development.

The Dedicated Freight Corridor Corporation of India (DFCCIL) is a Special Purpose Vehicle established under the administrative jurisdiction of the Ministry of Railways to design and develop Dedicated Freight Corridors, mobilize financial resources, and construct, maintain, and operate them. This is expected to bring down logistics costs by 17%. The Government has also endeavored to make States more diligent in lowering losses in the power sector in the current Budget. The Central Government has previously worked out a system (Revamped Distribution Sector Scheme) to award grants to States based on reforms. These reforms will bring down T&D losses thereby reducing power costs.

The government has announced that no global tenders for commodities worth less than Rs 200 crore would be released. To encourage domestic industry, the government has enacted a series of tariff and non-tariff restrictions, to limit imports of low-cost Chinese goods.

The government has tightened its foreign direct investment (FDI) policy to curb "opportunistic takeovers/acquisitions" by entities in bordering countries, as the COVID-19 outbreak has severely impacted the liquidity position of many domestic firms, making them easy prey for cash-rich Chinese investors.

Even if foreign investments for that sector are placed under the automatic route, any FDI proposal from surrounding countries will now require government approval. Before the decision, only Pakistani and Bangladeshi FDI bids had to be approved by the government. In several critical industries, like defense, space, and atomic energy, Pakistani FDI is also restricted. The automatic channel accounts for almost 90% of the country's FDI. Moreover, special registration will be required for participating in contracts with neighboring countries

Apart from the government reforms to boost the manufacturing sector, other factors indicate the manufacturing sector will show significant growth. Of course, China has always been a manufacturing behemoth and will continue to be so; however, the point is that India's cost competitiveness has been improving over the last few years, particularly in the last five or six years. This is due to the fact that China has been rebalancing its economy from export-oriented to consumption-oriented, which means they have been increasing their domestic consumption.

China has in the last 5-7 years increased its minimum wages consistently whereas India’s labor cost is low minimum. India’s minimum wage or labor cost is around 200 dollars, however, China's labor cost is 800 dollars. Even if you adjust for productivity gains, which were very high in China and low in India, India is still far more affordable than China on a labor cost basis.

China Plus One, or simply Plus One, is a business strategy for avoiding solely investing in China and instead diversifying into other nations. Western corporations have been investing in China over the past 20 years, attracted by the country's low production costs and large domestic consumer markets. The surge in Chinese manufacturing contribution from 3.4% in the early 2000s to 13.6% in 2015, then a decrease to 13.1% in 2019, is reflected in the total global merchandise trade. Higher labor expenses, a more strict environment, compliance expenditures, and other issues have all contributed to the recent drop in this share.

The "China-Plus-One" approach is a way for companies to diversify their reliance on China. Many multinational corporations are expanding their operations in growing Asian countries such as India, Vietnam, Thailand, Bangladesh, and Malaysia, where new manufacturing opportunities abound. A strategy that aims to improve supply chain management efficiency. Is it just a coincidence that such unrelated occurrences occur at the same time, or is nature conspiring for India to take advantage of the situation and make a name for itself in the global manufacturing sector?

For some other sectors in the list, such as electronics, telecom, and textile products, India needs to be prepared to face fierce competition from Southeast Asian countries, like Vietnam, Thailand, and Malaysia, or nearshoring options like Mexico for the US. In addition, India isn't the only country that offers governmental incentives to entice foreign companies to relocate. Several Southeast Asian governments, like Thailand and Indonesia, have made financial incentives available to entice foreign investors.

The Union budget statement of a 35.4% rise in government capital expenditure to Rs 7.5 trillion, as well as greater orders for domestic defense businesses, will result in more orders for Indian companies.

Corporate India will benefit from the government's increased Capex spending, according to CEOs, because it has a multiplier effect on the economy by crowding in private investments through its forward and backward linkages to several other sectors. This would help to streamline job creation and potentially kickstart a virtuous cycle of consumption-led growth.

The government's enhanced Capex is expected to increase the private sector's prospects to participate in a variety of infrastructure projects, including highways, new roads, housing, and drinking water projects, among others. To summarize, the Indian economy is slowly recovering from the effects of Covid-19, and the new Budget aims to speed up the recovery process by increasing government investment. The government's capital expenditures are expected to boost the infrastructure, railways, housing, and other sectors, and investors should choose their stocks accordingly, taking into account the risk associated with specific companies.

Mr. Vikas Khemani covered all the above-mentioned topics in-depth and also answered some questions from the audience towards the end of the session. He also presented the Carnelian strategy of capitalizing on the manufacturing shift. To know all of that watch the recording of this insightful session through the appended link below:

Get access to rich data and analytics of PMS & AIF by subscribing to us. Join the 38000+ investors & experts now: Subscribe NOW

May month saw a dip in the monthly returns of PMS schemes due to the war-induced supply shocks and inflation-induced Fed rate hikes. Only 40 of the 270 PMS equity schemes in the PMS Bazaar radar outperformed NIFTY and just one equity scheme out of them produced a positive monthly return in May 2022.

AIFs get time till Aug 7 for regulatory filings

Alternative Investment Funds (AIFs) have just got a major compliance burden off their back for some more time. Markets regulator SEBI has given another relaxation in compliance norms to AIFs in terms of regulatory filings. This paves the way for AIFs to do regulatory filings of March, April, May and June 2020 before August 07, 2020.

A saint was a sinner too. True knowledge can only be gained when people make mistakes. Of course, it matters a lot whether or not we learn from our follies. Meet Rohan Mehta, one of the youngest PMS fund managers in the billion-dollar industry, who openly admits the wrongs he did in the early part of his investing journey, and then smartly used those precious realizations to create investment systems that today manage crores of money. It is almost poetic justice.