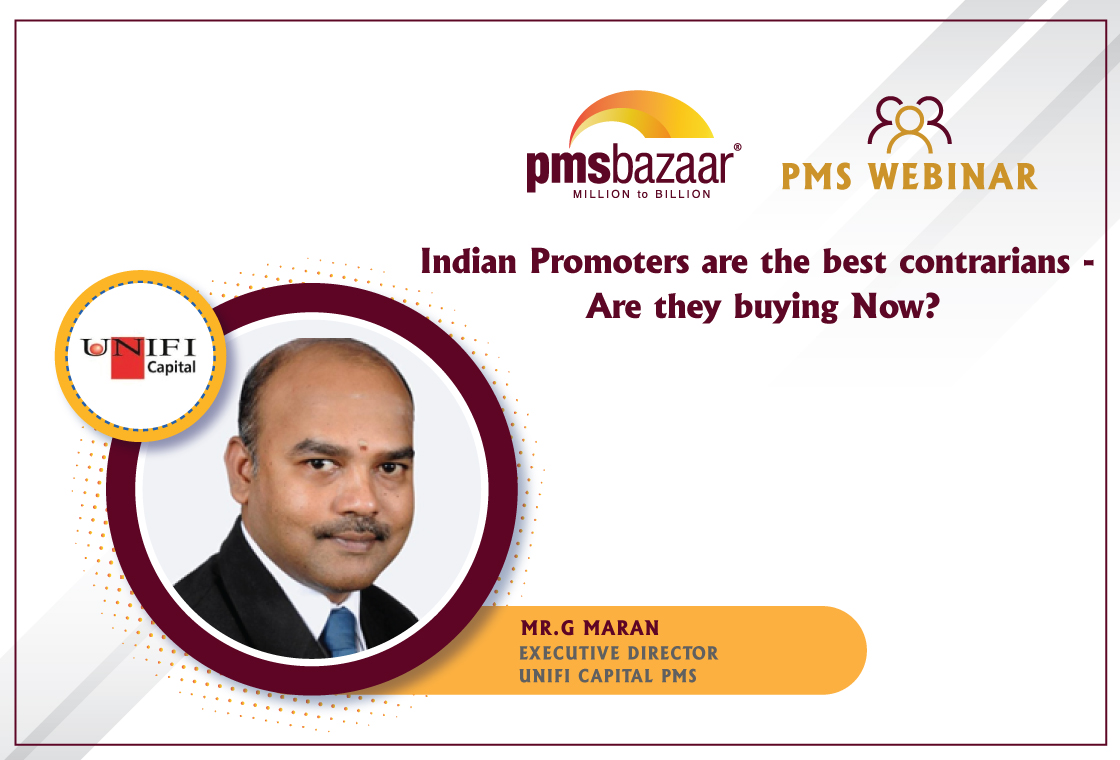 Maran, with his over 27 years in the capital markets, knows a thing or two about promoter buying just as every promoter knows something that Mr. Market doesn't.  The argument for being interested in a stock where the promoter has boosted stake is a simple, yet compelling one. Whenever the controlling shareholders find their stock trading at a significant discount to their perceived intrinsic value, they buy their companies’ shares and increase their stakes. Historic trends prove how such companies outperform broader markets by a wide margin over a period of time.

Unifi Capital has a PMS strategy where it tracks disclosures made by companies to stock exchanges regarding share purchases by controlling shareholders and uses that as a starting point to filter fundamentally sound stocks for a portfolio. Called the Insider Shadow Fund, the product has been lapped up by investors due to this unique theme. In a 1.30-hour-long webinar, Maran explained the nitty-gritty of promoter buying and answered investor queries, enriching the platform and knowledge of participants. Read on to know more.

According to an Unifi study, more than 370 companies out of the top 500 India-listed firms have a Managing Director who is either with the promoter or appointed by the promoter. Clearly, Executive management and Owners are pretty close here. There is a lot of attention on institutional ownership in India, it is actually promoter ownership that seems equally distributed as you go along the cap-curve in India. In the top 100 companies, the promoter stake is 53%. In the next 150 firms, promoters hold 59%. In the next 250 companies, promoters hold 56%, says Maran.

These data show that owners/promoters usually have huge skin in the game and it is the interest of investors to track promoter share transaction activity, especially where there is a pattern of buying. Of course, there will be exceptions like HDFC that do not have a promoter so to speak. But, exceptions do not make a rule.

Methods promoter use to boost stake

There are 5 usual methods promoters use to increase the stake.

* Creeping acquisition in markets - Usually, promoters can buy up to 5% stake in their companies through this route. This involves 100% upfront payment since promoters usually buy from the open market.

* Preferential shares issues - This is an offering of shares or convertible securities to a select group of investors, usually promoters, to raise capital. This helps promoters boost stake and provide the company with much-needed capital.

* Warrants - In this route, the promoters get a right to acquire new shares from the company at a fixed price by paying some money upfront. After warrants are allotted to the promoters, then they may approach the company any time within a time period and get shares at the predetermined price.

* Promoters not participating in buyback - Many of the cash-rich companies out with buyback offers where the company agrees to buy a portion of shares from shareholders. After buying them back, the shares are extinguished, thus reducing the equity base of the company. In case promoters choose not to participate in buybacks, their stake automatically rises if others participate.

Given his nearly three-decades-long experience in markets, Maran shared quite a few practical takeaways from when promoters buy shares or raise stake in their company.

In 2008 when markets fell 50% in that calendar year, 120 companies out of BSE-500 saw promoters boost their stake. In 2009 after the bounce back, there was a decline in the number of companies where promoters increased stake.

“From 2013 to 2014 when markets were flat, promoters kept on buying stake. Between 2014 and 2017 markets were up and midcap index tripled. In 2017, the number of companies where promoters raised stake was at a 10-year low. But that was the time when MF, FII inflows were at a record high. There were a huge number of IPOs. Even in 2020 March when people were paralyzed, promoters took a contrarian approach," shares Maran.

One of the important things that investors should remember is that while promoters buy as the market declines, they are not perfect timers. They do not know when valuations will reach the bottom. But when markets fall, promoters are known to increase the stake. "While a majority of companies where promoters buy tend to outperform the broad market over a long period, sometimes they generally move in line with the market in the short-term. Hence one may even observe such companies fall soon after the promoter-buying if the markets are volatile at that point in time. In recent times, you can see how even after promoters of Tata Motors and Lupin bought shares, the respective stock continued to decline," says Maran.

Contra investing by promoters is what probably sets them aside from other buyers. During 2018 and 2019 FMCG and Consumer Discretionary sectors were one of the best performers. "But these sectors have seen only 9% of the total promoter buying happened during the period. On the contrary, the lowest return sectors during this period were Auto, Pharma, Metals and these 3 sectors saw 35% of total promoter buying happening in this period," the Unifi Capital co-founder adds.

One of the prominent non-bank financial services companies with a big brokerage brand is an example of how smart promoters bought stock. Firstly, the company did its IPO near the market peak in 2007. The stock after the initial burst remained range-bound with a negative bias. That is when the buyback happened in 2013. "By 2018, this stock was up 10x," quips Maran.

Unifi Capital did a study of the last 15 years to see how a stock that saw promoter buying performed in the subsequent 3 years. In about 11% of cases, stock hasn't moved even after 3 years since promoter buying. In 14-15% cases, stocks moved but returns were barely in single digits. "But, in over 70% cases investor returns were substantial. I don't want to put a number. When you put any number that is 20%, 25% IRR, it's not sustainable we all know, but that number in a conversation gets anchored in an investor's mind," says Maran.

Maran, who doesn't watch TV but reads newspapers, is very clear about the promoter buying signal. "When they buy, it deserves our attention. If you see a significant number of promoters buying that gives you enough (idea) about markets and valuations. On the other hand, when you see a significant number of dilutions across or in a sector, take that seriously too," he says.

* Should investors buy when promoters buy - Not necessarily

* Is a trend of promoter activity in a particular sector a better reflection of valuation - Yes. This was seen in the Pharma sector in FY18-19 or Auto sector in 2019.

* Is movement in promoter shareholding more important than absolute stake - Yes. The absolute numbers are not as important as the numbers in a relative sense (up or down)

Before signing off, the Unifi Capital co-founder invoked the immortal words of John Templeton - Bull markets are born on pessimism, grown on skepticism, mature on optimism, and die on euphoria. "When everybody starts talking about markets, it is probably time to sell. But, people have been skeptical of Indian markets 6 months ago as they are today, this is a signal," Maran concludes. That is some food for thought for all investors out there!

Those who missed the opportunity to hear from the Experts directly can listen to the entire session through the appended link:

AIFs get time till Aug 7 for regulatory filings

Alternative Investment Funds (AIFs) have just got a major compliance burden off their back for some more time. Markets regulator SEBI has given another relaxation in compliance norms to AIFs in terms of regulatory filings. This paves the way for AIFs to do regulatory filings of March, April, May and June 2020 before August 07, 2020.

The key to successful investing, over the long term, is to have every major Asset Class in your consideration set: The word Asset Allocation is bandied around rather casually these days. Hence it is important to understand what Asset Allocation is not. Understand from Mr. Shankar Sharma, Vice Chairman & Jt. Managing Director, First Global.

The gold standard of measuring an investment's success is alpha i.e the extent of out-performance over the benchmark return over a period. This logic makes a lot of sense. Investors pay fees to the investment manager to out-perform i.e. get bang for the buck. After looking at the data for the last 1 year, 3 years, 5 years and 10 years, we have conclusive proof that PMS is a good vessel to generate alpha and they also beat MF equity funds. Read on to know why we are saying this.

133 PMS Strategies reported 205 unique stocks in their disclosed portfolios, with single-stock weight as high as 29.75% in a strategy. In this monthly insight piece, we take a detailed look at the most-owned stocks, unique picks, sectoral preferences and stock allocation weights for June 2020.