Why Market is going to be significantly different from what it has been in the past?

Generally, the equity market tends to go down to eventually go up and volatility is common in the equity market. Hence, any investor's success depends on having a well-diversified portfolio. As an individual investor, you must understand how to select an asset allocation that best suits your investment objectives and risk tolerance. By following a methodical strategy, investors can build portfolios that are aligned with their investment plans. 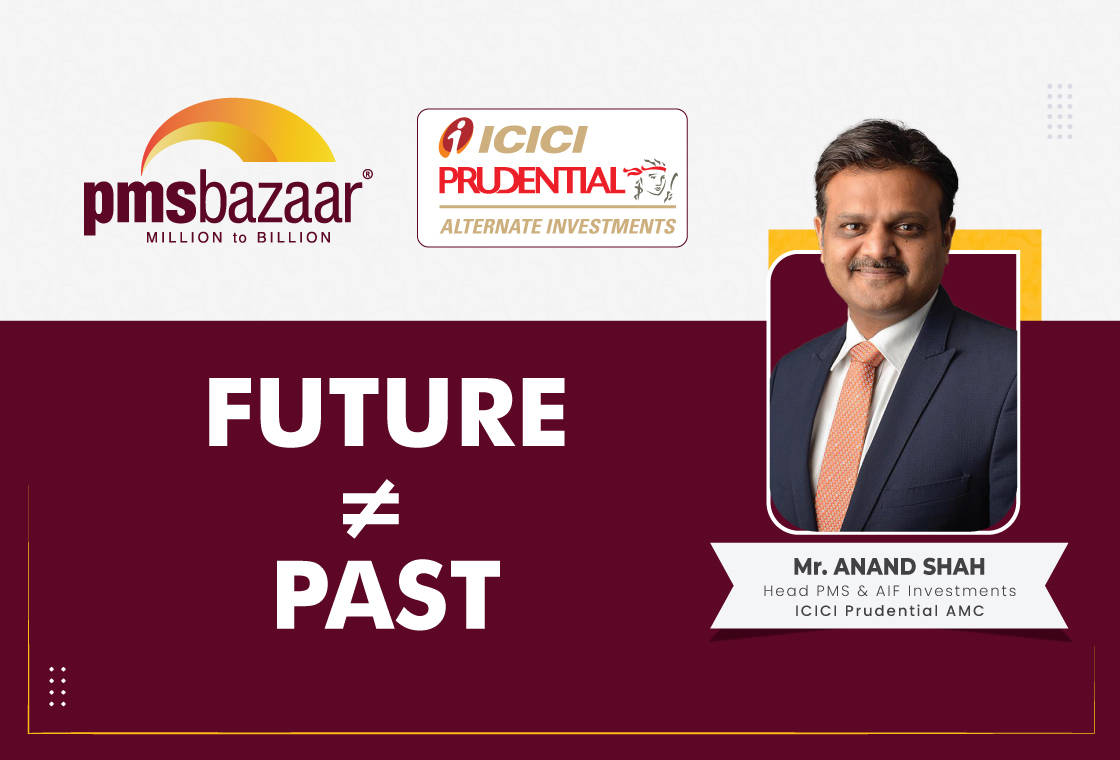 In the webinar, Mr. Anand shared valuable insights on the equity market, the economy in the short and long run, and how to build a resilient portfolio to navigate the volatility of the market. This blog covers the insights shared by him during the webinar session.

Fundamental factors drive stock prices based on a company's earnings and profitability. Earnings per share (EPS) is the owner's return on investment if they own common stock. You are purchasing a proportional share of a whole future stream of earnings when you buy a stock. That is why the valuation multiple exists: It's the price you're willing to pay for a steady stream of income in the future.

Part of these earnings may be dispersed as dividends, while the rest will be held by the company for reinvestment (on your behalf). The future earnings stream can be thought of as a function of both the existing earnings level and the predicted growth in this earnings base.

Volatility isn't pleasant for most investors. Investor sentiment has plummeted to alarmingly negative levels, so it's no surprise that some are wondering if now is the moment to get out of the market and hold on to their capital until the storm passes. The quick answer is that it hasn't happened yet. In reality, for most long-term investors, now is the time to either stay involved or enter the market.

A diverse portfolio can assist limit losses in the case of a market slump. Many people believe they can beat the ordinary investor when it comes to market timing. However, it's critical to think about the risks of doing so. Have a deep consideration before you exit the market the next time market volatility makes you second-guess your long-term investment strategy.

Where do we stand today?

With the conflict going on for more than a month and Western countries adopting a barrage of severe sanctions to shut Russia off from the world's financial ecosystems, investors are grappling with yet another wave of uncertainty following COVID-19.

It may not be prudent to liquidate investments in haste if markets continue to be volatile. This is because, while the short-term outlook remains choppy as a result of Russia's invasion of Ukraine, it's important to remember that the stock market has seen all kinds of turbulence in the past, including wars, pandemics, political instability, and has managed to shrug off the effects and eventually bounce back.

Also, any decision to liquidate any investments in the current environment should take into account other factors such as the asset class's performance, whether any of your goals can be hampered by the current disruptions, or the possibility of being directly impacted – for example, owning a large volume of stocks in a volatile market.

Overdependence on Russian natural gas and crude oil in Europe, as well as reliance on both Russia and Ukraine for critical agricultural commodities, are among the most significant weaknesses. Russia and Ukraine account for more than 25% of global wheat commerce, as well as more than 60% of global sunflower oil and 30% of global barley exports. Because Russia is a significant worldwide fertilizer exporter, any supply shortages or restricted access might have a global impact on output.  However, this may be for six months to one year, but the inflation problem that arises with this will increase, the central bank has increased interest rates and we would witness lower growth. Also, stocks that have significant growth are the ones that are at more risk than the stocks which are not expecting too much growth.

Earning Story of the Last Half Decade

However, after a lot of effort by states and the central government, as well as the business environment that exists today in the world, where the world wants an alternative to China, an alternative to Russia and Ukraine, this has been driving the real profit growth rate for manufacturers, especially in the last two years. We are seeing a remarkably high pace of earnings growth, although B2C companies are doing well, it is at a much slower rate than they were previously. Expectations were much higher, but surprisingly, manufacturing and mining companies are faring far better, which reflects, that in the past, the manufacturing and mining industries that were underperforming are today outperforming even B2C companies.

The recent structural reforms have had a huge and positive impact on Indian corporates. Buyer trust in the real estate sector was restored thanks to government structural reforms like GST and RERA, as well as increased liquidity in the banking system. While the market has made significant progress in recent years as a result of these reforms, the imposition of the national lockout in mid-2020 will provide a significant challenge for the business. However, with government and RBI backing, the sector and developers were able to recover by the end of 2020. Positive morale pervaded the economy, and GDP showed hints of expansion thanks to a V-shaped recovery. The administration has been implementing a number of steps to help the sector and the economy in general during the previous few months. The industry is now hopeful about future growth.

With the start of 2021, the momentum of historic home sales, fueled by cheap loan rates, decreased stamp duty throughout the festive season, and developer offers seen at the end of 2020, will gain even more traction. The real estate sector will undoubtedly rebound now that vaccine immunization has begun to bring India back to normalcy.

Some of the structural reforms that the government brought in such as in Insolvency and Bankruptcy Code, etc. might have been temporarily overshadowed by external developments such as the pandemic and now the geopolitical conflict. However, once these clouds recede, they will begin to manifest their benefits and advantages in advancing India’s potential growth in decades to come. Also, the decision to implement the sweeping corporate tax reform measures reflects the slowdown in economic growth momentum in recent quarters as well as the need to improve India's international competitiveness as a manufacturing hub.

the Production Linked Incentive (PLI) Schemes were announced across 14 key sectors, to create national manufacturing champions and create 60 lakh new jobs, and additional production of 30 lakh crore during the next 5 years. PLI Scheme will not only encourage foreign companies to find a workforce in the country and thereby generate employment but also encourage domestic and local production to create micro-jobs.

China Plus One, or simply Plus One, is a business strategy for avoiding solely investing in China and instead diversifying into other nations. Western corporations have been investing in China over the past 20 years, attracted by the country's low production costs and large domestic consumer markets. The trade conflict between China and the United States, as well as the COVID-19 outbreak, have highlighted the necessity for businesses to diversify their supply chains beyond China. This has resulted in the "China plus one" strategy, in which multinational corporations expand their operations beyond China. As firms hunt for a new center of production or distribution, certain Asian countries such as India have put up initiatives to attract foreign investment.

The 'China Plus One Strategy,' aims to make India an alternative investment destination for major global corporations looking to diversify their supply chains away from China. The growing tendency of corporations in major European and American countries to relocate their production bases away from China opens up a window of opportunity for India's trade sector, which must be capitalized on.

Mr. Anand Shah covered all the above-mentioned topics in-depth and also answered some questions from the audience towards the end of the session. He also spoke in detail about their framework for identifying resilient businesses and portfolio strategy. To know all of that watch the recording of this insightful session through the appended link below:

Get access to rich data and analytics of PMS & AIF by subscribing to us. Join the 38000+ investors & experts now: Subscribe NOW

"Sunil Singhania on the New Normal for Market Valuation"

Abakkus Asset Manager runs equity strategies in AIF and PMS platforms. Founded by renowned fund manager Sunil Singhania, who achieved great fame in Reliance MF, Abakkus has made a name in two years of its existence. In a special session organized by PMS Bazaar, Sunil and Aman Chowhan share with investors their take on US yield, current market valuation, Covid impact, Abakkus investment philosophy and much more.

8 out of 10 PMSes Out-Performed Nifty in November

The Indian stock benchmark Nifty 50 fell 3.9% in November, but the declines in the broader market were gentler. Midcaps fell 2.7% while smallcaps were largely flat. Naturally, PMS strategies that usually spread their bets across the market performed better. As many as 219 PMSes out-performed the Nifty 50 in November, i.e. almost 83% of the PMS strategies tracked by PMS Bazaar. Due to the lop-sided nature of market performance this month, the best performing PMS strategies belonged to midcap, small & midcap, multicap, smallcap buckets. Here is a recap.

More than half of the PMS schemes, led by midcap strategies, out-perform the benchmark

The Scary Side of Super Quality Stocks Hiding in Plain Sight

Identification of opportunities in the Indian Market - The Marcellus Way

"To win the investing game, understand the field"

In a special session organized by PMS Bazaar, two experts from Helios namely storied fund manager Samir Arora, and Dinshaw Irani, the CIO of Helios India, shared with investors their lessons and experiences over an hour-long interaction. The investing gurus asked investors to be flexible and challenge the common myths that float around. Samir is a very well-known and respected market voice. He shared his views on some of the assertions any investor would probably hear, and then tried to reveal the reality behind such assertions. Dinshaw explained the investing philosophy behind the Helios India Rising PMS. Read on to know more details.

Stock markets are volatile by nature which tends to make investors nervous about their exposure to one asset class, especially equity. To get your asset allocation formula right at all times, investors need to understand their risk appetite and choose the right strategy to build wealth in the long term. Dynamically managing asset allocation adjusts the mix of asset classes to suit the given market scenario. Based on the topic of Dynamic Asset Allocation, PMS Bazzar conducted a webinar, and this blog would discuss key insights discussed in the webinar, and how Dynamic Asset Allocation is an active part of fund management to respond to the changing market conditions on an ongoing basis.

Why Your Portfolio Should Be Ready For The New Growing India

2020 taught investors many lessons and the new year started off on the right note with a unique Budget that lays out a vision for a new economy. Equity investing is built on optimism about the future. Yet, it is important to learn from the old ways. But when the country itself is on it way to transforming into something new, should investors still play the old themes? This all-important question was addressed by Aniruddha Sarkar, the CIO and Portfolio Manager at Quest Investment Advisors in a special PMSBazaar webinar. Bringing with him over 14 years of experience in the capital markets with diverse role managing money for investors across PMS, AIF and Advisory business, Sarkar shared interesting insights about the necessity to play the new economy, rather the new growing India. Read on know more.