If there is one thing that markets hate, it is uncertainty and with trade wars, political ructions, and mixed economic signals — not to mention a host of company-specific factors — it's tempting for investors to sit on the sidelines until the outlook becomes clearer. But, investors need to know how to invest through uncertain times and when and how soon uncertainty or the present market crisis will end. This webinar blog covers an interactive session with Mr. Samir Arora, in which he answered questions on topics related to Inflation, uncertainty in the Global markets, Recession, etc. 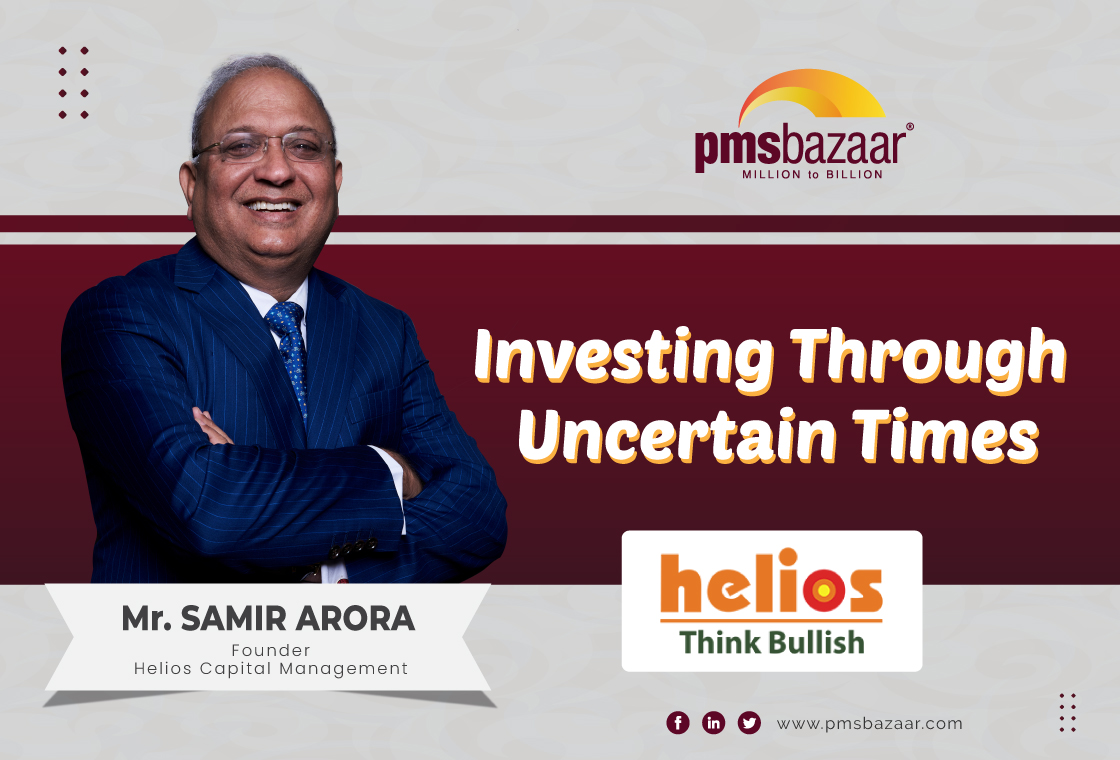 Here is an Excerpt from the Interaction:

Host: After the recent 75 bps increase by Fed, 75 bps has become the new 25 bps. With the Fed planning to continue to increase interest rates, do you think the FED is being hawkish in its assessment?

Mr. Samir Arora: They are definitely hawkish. In addition to being hawkish, they also speak in a hawkish manner and have for a long time. I think it was in February or March that I saw a video of Chairman Powell responding to a question about whether or not he would take "draconian steps" to control inflation. Instead of simply responding, "Yes, or No," he said, "Let history record that my answer is yes”.

The point is that the Federal Reserve keeps saying that we are focusing on inflation and will be taking Draconian measures. But the market feels the FED is too soft for that and they will back off in the end and never do such things. This for the FED is like a loss of credibility. So, there are chances that the FED probably will take draconian measures to control price instability or inflation. The FED conducted a three-day annual conference at Jackson Hole in Wyoming, with the focus on how much higher US interest rates might need to go and for how long if inflation does not significantly fall from its current 40-year highs. After the Chairman spoke about taking stringent measures, the market fell four percent that day. After that all the Governors, in particular, Neel Kashkari gave an interview saying that he was very happy that the market has taken cognizance of the speech, effectively signaling they want the US market to be down because if the market is not down effectively it is like saying that the financial system is not bold enough to take measures. Hence, yes, this time the FED is hawkish, and very hawkish and beyond.

Host: Since inflation is rising and has been for decades, the conflict in Russia is already causing immense human suffering and economic hardship. However, by achieving two percent inflation, the activities of the threat could soften the landing. How long do you think it will take the Fed to reach its landmark two percent inflation goal?

Samir Arora: I don't pre-empt whether they would reach 2 percent or not. In fact, FED itself is not saying that it will reach 2% before 2024. At a press meeting that took place after FED announced the rate increase, the Chairman was questioned on the targeted inflation rate. If you have watched the press conference that took place after the rates increase, the FED chairman told that as per his projection inflation would reach 2.1 percent. In addition, the Chairman also stated that while it is 2.1% percent, nobody is expecting to reach the target next year and that there is no soft landing. So, the catch here is, the FED itself is not saying inflation would reach two percent before 2024.

Previously in such a situation, the FED used to say that we are confident that the recession can be avoided because the labor market is strong. But now, the FED Chairman said in the press conference said that if it happens it is at the cost of doing business, which implies he was not even saying if a recession will happen or right now the focus is on inflation. Nevertheless, no one is easily reaching two percent immediately, but there is credible evidence that it is moving in that direction.

This means that the core inflation rate, which is currently around 6.3% or so, would go down to 5% or 4%, but I still believe that the US market won't decline the following year. In the past, you may have observed that there are calendar years when there is a recession, but the U.S. market did not decline. This is because if it had done so, the market would not have experienced a major rally this year and would have sunk by, say, 30%. Many equities would also have dropped by 60% to 70%. The markets would therefore still be favorable until the end of 2023, and there is a chance that inflation may reach about 2 percent by 2024.

Samir Arora: According to me there has already been a recession in the United States, The term originally meant two-quarters of declining GDP growth. But, in the US, the National Bureau of Economic Research must call it a recession. So, I am not sure if the NBER has made mention of the US going through a recession. I suppose they haven’t termed it as a recession because they claim that there is no unemployment and that there is a wage increase.

Though even I am unsure of how they define a mild recession, I believe that it ends after two quarters and may just be a fraction of one percent at this point, meaning that it is considered to be mild. So, how do I know what is mild and what is a deep recession? For me, it is like a mass-market ball. A larger fall makes me believe it's a deep recession, whereas a smaller fall makes me believe there isn't one or it is a mild recession.

Host: If you notice, everyone is talking about decoupling, and that India will outperform the US by 17–18% in terms of performance. Are we actually decoupled based on performance over the past two months or the entire year? The long-term data suggests that we rhyme with the U.S markets.

Mr. Samir Arora: In fact, I don't believe there has ever been a year in my whole career as a fund manager where the markets have moved in such a stark opposite manner and where in India it is rising while the rest of the developed markets and the US are falling. But I still don't believe there is decoupling beyond the point. I think the US will stop falling, and as of now, nobody is thinking that the US is facing a global financial crisis. However, we don't need the US markets to go up to feel good. As long as it doesn't fall or only go down by three-five percent, it's okay.

While the above are excerpts from the interview, Mr. Samir Arora answered more such questions. To see the full interview and get more insights, please click the appended link.

Get access to rich data and analytics of PMS & AIF by subscribing to us. Join the 40000+ investors & experts now: Subscribe NOW

Amidst Turbulence, 277 of 298 PMS Strategies outperformed NIFTY in September 2022

Having Q2 Results on the deck, India Inc’s profit is expected to shrink for the fourth straight quarter however there is a rising revenue momentum, which can be inferable from moderate price hikes and steadily rising volumes. The said expectations of the Indian market had translated into the index performance where NIFTY posted a fall of 3.74% in the month of September. Global markets are also confronting inflationary pressure on their earnings expectations yet with a higher degree of inflation when compared to India. The US stock market’s weakest month of the year is typically September when Dow 30 posted a fall of 8% and the S&P 500 also fell by over 8%. In the Indian Alternative Investment segment, the PMS strategies reacted to the market sentiments, yet managed the risk relatively well with 277 strategies (out of 298 Strategies) beating NIFTY in September. Many boutiques and smaller AMCs performed well this month, compared to the lukewarm performance of star fund managers this month.

Understanding how various types of stocks, bonds, and other assets have historically performed at various points in the business cycle may help investors identify opportunities as well as risks. This business-cycle investing approach differs from both short- and long-term approaches because shifts from one phase of the business cycle to the next have historically taken place every few months or years on average. This blog will discuss how knowing the cycle may help investors evaluate and adjust their exposure to different types of investments, as the likelihood of a shift from one phase of the cycle to the next increases. Historically, different investments have taken turns delivering the highest returns as the economy has moved from one stage of the cycle to the next. Due to structural shifts in the economy, technological innovation, regulatory changes, and other factors, no investment has behaved uniformly during every cycle. However, some types of stocks or bonds have consistently outperformed others and knowing which is which can help investors set realistic expectations for returns.

According to IMF data, the Indian economy would likely have the fastest real growth in Asia in 2022 and be the only one to experience nominal double-digit growth. This makes India the fastest-growing Asian economy in the Asian region in 2022–2023. In this blog, we shall describe India’s growth super-cycle, and where the Indian economy stands today

Amidst global turbulence, our Indian economy looks very stable & promising. With FIIs returning back strongly and NIFTY nearing 18K Mark, PMS strategies have capitalized on the positive market sentiment to generate a positive performance in August 2022. This August, almost 72% of PMSes outperformed NIFTY & just 3 of them returned a negative yield.

The Asian Development Bank predicts that the Indian economy will expand by 7.5% in FY2022 and by roughly 8% in FY2023, supported by rising public infrastructure expenditure and a rise in private sector investment. Investors are prepared to devote a larger percentage of their savings to capital instruments in 2022 and are also motivated to invest in the growing industries in India. They are also inspired to invest in India's expanding industries. This blog will cover those sectors that will grow in the future in India and sectors that will ﬂourish even more in the investing game, in the near future. Along with that sectoral Growth triggers and their impact, sectorial past performance is discussed.

The economy has recovered to close to pre-Covid-19 levels based on the growth in core industries and other high-frequency indicators. Contrary to the widespread perception that existed in April 2020 that large caps will outperform the mid and small caps, the markets are approaching pre-Covid19 levels, particularly in the mid and small size space. The high-growth portfolio is made up of high-growth companies, predominantly in the small- to the mid-cap range, and focuses on emerging themes in the future economy. In this blog, we brief you about high-growth stock models and strategies fund managers follow to make a portfolio grow in value.

The Indian economy has fully recovered to the pre-pandemic real GDP level of 2019-20, according to the provisional estimates of GDP released on May 31, 2022. Real GDP growth in FY 2021-22 stands at 8.7% which is 1.5% higher than the real GDP in FY 2019-20. These figures are associated with stronger growth momentum, indicating increased economic demand. India has emerged as the fastest-growing major economy in the world and is expected to be one of the top three economic powers globally over the next 10-15 years, backed by its robust democracy and strong partnerships. In this blog, we shall discuss India’s current market trend and how India is poised for robust growth, surpassing both emerging and developed markets

Amidst the latest earnings downgrade of India Inc., July month saw a surge in the monthly returns of PMS schemes as the inflationary pressure is easing in the Indian economy. 166 of the 283 PMS schemes in the PMS Bazaar radar outperformed NIFTY and only one scheme out of them produced a negative monthly return in July 2022.